This Is Not Good News...

The docks that I keep Bootlegger at have already had to be raised once, and may have to be raised again if the Great Lake water levels continue to go up.

This story was originally posted/published by the Detroit Free Press. You can find the original story here: https://www.freep.com/story/news/local/michigan/2019/10/11/great-lakes-water-levels-record-michigan-flooding/3919348002/

It appears 2020 won't bring relief from high Great Lakes water levels — and they could be even higher than this past record-shattering spring and summer.

Forecasters now predict Lakes Michigan and Huron will start 2020 at 11 inches higher than water levels in January 2019, said Keith Kompoltowicz, chief of watershed hydrology at the U.S. Army Corps of Engineers in Detroit.

"The latest forecast extends into March, and for the most part, levels are going to be on-par with or above where they were at the same time last year," he said.

The shoreline of Lake Michigan seen from Big Sable Point Lighthouse in Ludington Sate Park Thursday, July 11, 2019.  (Photo: Mandi Wright, Detroit Free Press)
Whether records go even higher next summer will be determined by factors such as snowpack and whether heavier-than-usual rains occur for a fourth straight spring, Kompoltowicz said.

Lake Superior, Lake St. Clair, Lake Erie and Lake Ontario set new record high water levels over the summer, with lakes Michigan and Huron an inch or less off their 100-year highs. In July, lakes Erie and Ontario broke their monthly records by more than 4 inches.

Across the region, that led to flooded campgrounds and streets along Great Lakes connected waterways, caused boating problems with submerged structures, and caused shoreline erosion that all but eradicated some Lake Michigan beaches.

Spooky-high water levels for October
A wet September across Michigan has the Great Lakes and Lake St. Clair well above their long-term average levels for October. It’s potentially helping set the stage for another record-breaking spring and summer of water levels next year.
Doris Fleming has lived on Harbor Island Street in Detroit's Jefferson-Chalmers neighborhood for more than six decades. She has seen a lot of flooding off the nearby Detroit River in high-water years, and this past spring and summer was among the worst, she said.

"It’s been bad," she said. "The city has been pretty good about bringing sandbags in. But if there’s only one opening, it messes it all up."

Flood waters tend to move up the dead-end Harbor Island Street and into the city blocks to the north and east, she said. "They have more problems than we did right here" closer to the river, she said.
The news that water levels could be even higher next spring and summer worries Fleming.

Volunteers palsied sandbags along canals in the Jefferson Chalmers neighborhood to hold back the rising Detroit River Thursday, July 11, 2019 in Detroit, Mich. (Photo: Kirthmon F. Dozier, Detroit Free Press)
"Even if it's 6 inches higher, it will cause problems," she said.

About 250 miles to the northwest, along Lake Michigan, the forecast is troublesome for Manistee city officials.

"Certainly, if it gets worse, it's a worry," City Manager Thad Taylor said.

The city had to raise docks in its marinas to accommodate the higher water, and suffered shoreline erosion along the river channel leading from Lake Michigan into Manistee Lake.

"We fear losing some retaining walls," he said.

While the city's boat launches were usable, the docks were under water, Taylor said.

The high-water problems don't go away as fall turns into winter. Last year, the city had ice pushed by winds come ashore and damage its river walk, Taylor said.

"It's a litany of things we've experienced," he said. "We've had to make some repairs, and fortunately, our municipal insurer has stood tall for us.

"We're still concerned if it goes up another 4, 5, 6 inches, we're going to experience additional problems."
This year's record-breaking water levels were fueled by heavy spring rains. According to the National Weather Service, metro Detroit received 5.82 inches of rain in April, almost 3 inches more than the long-term average for the month.

"Looking across the whole Great Lakes region, that period of January to June this year was extremely wet," said Lauren Fry, technical lead for Great Lakes hydrology at the Army Corps' Detroit office, who's currently serving as a visiting scientist at the National Oceanic and Atmospheric Administration's Great Lakes Environmental Research Laboratory in Ann Arbor.

"We started to see less precipitation in July and August. But water levels really came up early because of that spring and June precipitation. The lakes take a little while to respond to changes."

The interconnected nature of the lake system also plays a role in region-wide rising water levels, Fry said.
"If the level of Lake Erie is high, that's going to influence the level of the Detroit River," she said. "And that's going to propagate into Lake St Clair, on up into the St. Clair River and eventually Lake Huron."

A family of ducks swim in shallow water on the shores of Lake Michigan Saturday, Sept. 7, 2019, near a break wall in Northport Michigan that once was home to a sandy beach shoreline. (Photo:Mandi Wright, Detroit Free Press)

The impacts of climate change on Great Lakes water levels going forward isn't clear. Historical data shows temperatures in the Great Lakes region are rising faster than the rest of the continental U.S., and winter and spring precipitation, particularly via strong storms, is increasing. Those trends are expected to continue. But modeling also shows hotter summers and less ice cover on the Great Lakes in the winter, which will tend to increase evaporation.

Now it all comes down to winter and spring rain and snowfall.

"If we see another winter with a very healthy snowpack, coupled with the flooding rains that we saw last spring, then we would be dealing with even higher record-breaking water levels next year," Kompoltowicz said.

Even average precipitation levels would keep lake levels well above their historic averages, Fry said.
"It would take a fairly dry season, and even year, to bring things down," she said.


The mast is down and Bootlegger is finally put to rest for the winter. It took us three tries to get her out of the water: the first time was a no go because of high winds, the second time was a no go because of a death, and the third time was the charm. Always a sad time to know that Great Lake sailing is put on hold till next spring, but I think the time away makes me really appreciate the time when I am sailing. .

All that is left to do is to get the winter cover on her and then start thinking about next season. Hmmm....maybe another HOOK, a Super Mac and Back (1200 miles of solo non stop racing), Mike Kenny's Doublehanded Race and the 2X2/Solo Race, and ..... 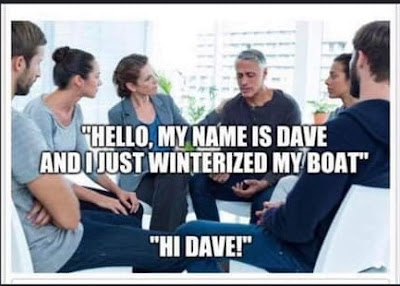 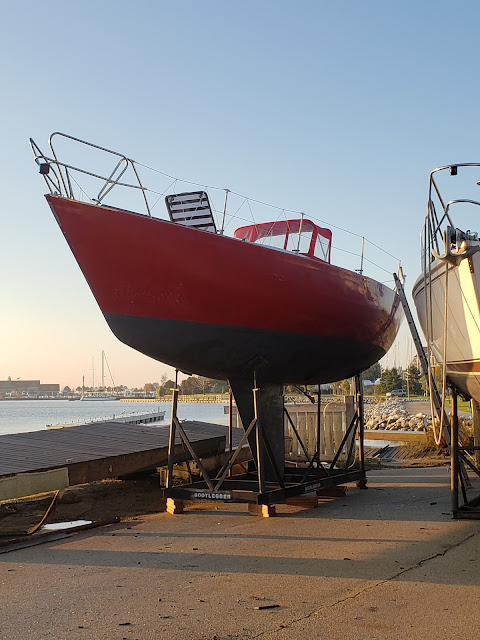