Below is the acceptance for our "Request for Invitation" from the Chicago Yacht Club Mackinac Committee. Reader's Digest version...we're in. If you go to "Current Entries" you'll see that we're listed as an entrant, and the crew list.

As you read the letter below you'll notice that they mention a "Pre-Race Inspection," well, I've been notified that we've been selected.
Dear David Bonzon (Bootlegger):
The Chicago Yacht Club Mackinac Committee is pleased to invite you to enter the 104th Chicago Yacht Club Race to Mackinac, presented by Veuve Clicquot. This Invitation is extended personally to you -- it is not transferable to any other individual. We are working hard planning a world-class event for you and your crew.
Receipt of this Invitation does not guarantee you a place in the 104th Race. You must submit your entry online and pay the entry fee in order to reserve your place. Please note, if you have changed boats since your last Mac entry year, you are required to submit for approval a new request for invitation with the new boat information and crew experience through the "Request for Invitation" link on our home page; do NOT accept the automatic invitation listing your 2011 or prior year boat. We may request additional background information on each of the crew members to ensure that adequate seamanship and skill requirements are met. As provided in the Notice of Race, you must notify the Committee of any changes in crew. The Committee reserves the right to withdraw your invitation in the event it determines that the crew does not, in the Committee's judgment, have the necessary seamanship and skills for the Race. Please Note: For 2012, changes in minimum stability requirements (requirement 4.3) have been applied by division. Also note the Pre-Race inspection requirements (requirement 18); this is a new requirement for the 104th if your boat is selected.
Interest in this year's Race is remarkably strong and we expect another sold out race. While we want to accommodate all interested and qualified skippers, space constraints at Mackinac Island and St. Ignace may require us to set a limit. We strongly recommend that you submit your entry and fees as soon as possible.
Please go online using your login information below to double check your profile and to make sure it is still accurate and complete. Pay special attention to the crew information and be sure to include complete and accurate emergency contact information for every person on the boat. We consider this an important safety requirement. Also, please complete the "Tell Us About Your Boat" section - we may use this info in our commemorative Race program. You will need your User Name and Password anytime you wish to return to the site and should have it with you during Registration at Chicago Yacht Club on July 19 and 20, 2012. If you did not establish an easily memorized password, we encourage you to change it when you access your profile.
Posted by dbonzai at 4:34 PM

Joe in the Tribune

We have a celebrity on the boat, below is an article that I found in The Chicago Tribune that mentions Joe's domination of the T-35 Class in the 1989 NOOD Regatta.

June 19, 1989|By William Recktenwald.
Out-of-town sailors took top honors at the Audi-Sailing World National Offshore One Design regatta off, which concluded Saturday off Chicago`s lakeshore. The five-race series pitted nine types of identical craft in Lake Michigan.
Harry Melges III of Zenda, Wis., in Space Ranger topped the fleet of 27 J-24s with four first-place finishes and a fourth; Ralph Fisher of Hickory Hills in Night Hawk placed second with Chicago J-24 Champion Chuck Lamphere in Banana Republic third.
Twenty-four S2 7.9 boats competed for their North American championship, with Minnesotan Don Pemberton in Jayhawk the winner, followed by Canadian Paul Derrig`s Kamikaze and North Sail`s Perry Lewis of Wisconsin in Peregrine.
The regatta uses a low-point scoring system with first place getting three-quarters of a point, second place picking up two points and so on.
Lewis took two firsts, a second and a third. But in the first race, he crossed the starting line seconds early and was penalized from second to 24th place.
Tom Knorr of Wilmette won in his 33-foot Tartan-10 Meracious, followed by Chicagoan Jeff Asperger in Bombshell. Dan Darrow of Libertyville in Salacious was the winner of the J-30s. Oak Park`s John Lynch in Esprit sailed to victory in the over-40-foot class.
Al Rose`s one-ton class Saucy took top honors, and a Traverse City boat, Double Digits, was the winner among the J-35s.

Kentuckian Joe Levanowicz, sailing his new T-35 Primary Recovery, won that class.
In Hobie 33s, Ron Nolan of Kansas in Johnathan Swift tied with Holy Toledo, an Ohio boat.
A total of 93 craft sailed in a variety of weather conditions during the regatta, which began Thursday and was sponsored by the Chicago Yacht Club.
Posted by dbonzai at 9:29 PM

Here's the tentative practice schedule for the Mac Race crew.

Thursday, May 31 (evening) or early Friday, June 1 (morning) arrive at boat. We'll practice our MOB drills and get familiar with the boat during the day on Friday, June 1. Then Friday evening we'll participate in the Chicago to St. Joe Race. Saturday is a lazy day in St. Joe with a party Saturday night at the club. Sunday we race back to Chicago. Bottom line, everyone is going to need to try and get off work on Friday. If we don't have enough takers than we'll reschedule this practice.

Saturday, July 7 and Sunday, July 8th we'll hold a practice.  We'll use this practice to review MOB and other safety procedures, and to do a lot of sailing drills. We'll see if we can exhaust Jason with headsail and chute changes, and jibes.

Remember to review the MOB video on this site.
Posted by dbonzai at 7:01 PM

Dave Murray, the chief weatherman for Fox 2 News in St Louis, came out with his spring forecast and he's predicting that during the month of April the main rivers, Illinois and Mississippi, will only experience minor and moderate flooding.

The month of May, on the other hand, he's seeing some "big flooding" on the main rivers.

So it looks like we'll try leaving St Louis on Saturday, April 21, arriving in Chicago, with a little luck, sometime on Tuesday, April 24. I had originally planned on leaving on a Friday, but in order for Jim to make the trip it's been moved out one day.

Right now we have Jim, Joe, Dave S, and myself. If anyone else wants to join us let me know. Everyone will have to make their own arrangements to get back home since I'm going to have to stay in Chicago until at least May 1, the earliest that I can put the boat on the mooring. Amtrak is a good bet with tickets going for around $24 to St Louis or $23 to Alton, IL.
Posted by dbonzai at 10:08 PM

Below is the safety drawing for Bootlegger, a requirement for both Mac Races. I'll post one in the main cabin and one in the head, it'll give you something to read. 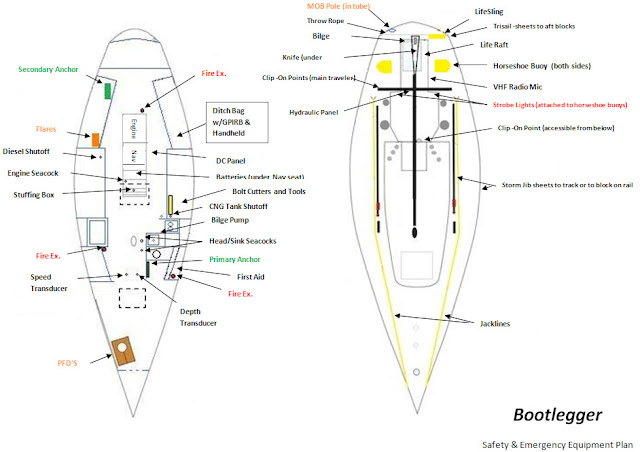