Are we there yet?

We left St. Louis Tuesday, June 26 and arrived in Chicago on Saturday, June 30 one day latter than our planned arrival. There were 8 locks that we had to pass through and we had an average wait time of 5 hours, much longer than any trip that I've taken in the past. Part of the problem was lock maintenance which caused a loggerhead of commercial traffic, another contributing issue was the gross inefficiency of some of the lockmasters, one of which made no effort to hide is distaste for pleasure craft.
Our fuel consumption really surprised us, I was expecting to use close to a 1/2 gallon an hour, instead we only used a quart an hour.
After the first day, which was our only cool day, we saw a lot of 100+ degree days and tried all kinds of different techniques to stay cool: bucket baths, plugging the cockpit drains and filling the cockpit with water, using a bed sheet as an awning, and drinking an incredible amount of water.

The heat wasn't our only weather foe, while waiting for the Lockport lock to empty we were hit by a very powerful squall that had winds in the 60's+, lots of horizontal rain, and more lightening than than I've seen before. With a lot of difficultly we put the boat against the wall at the lock entrance, but when we tried to tie up to the railing, it was hit by lightening and then the transformer, only about 30 feet away, was also hit and exploded causing the lock to lose all power. In time, we were able to get the boat tied up and wait while the lockmaster got the generator to power the lock.

After entering the lock a second squall hit us causing a bit of a wrestling match between us and the lock wall. We won and the mast escaped with bearly a scratch. Seeing that we were about to be hit by a third wave, I asked for, and was granted, permission to tie up for the night outside of the upstream side of the lock for the night. 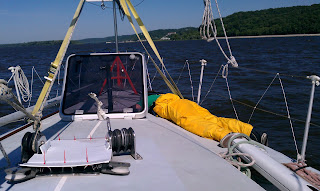 Leaving St Louis with Matthew taking a nap on deck 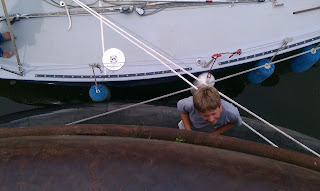 Matthew climbing a cell, used to tie up barges outside of locks, while waiting on the Starved Rock lock. 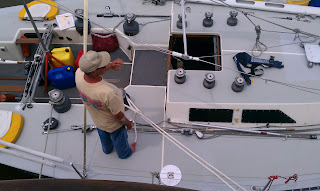 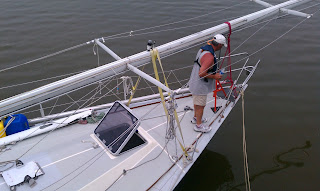 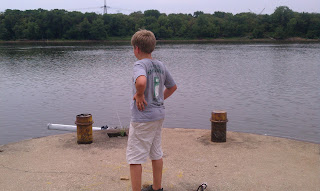 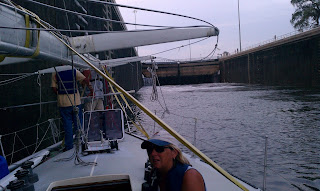 Inside the Starved Rock lock, almost at the top of a 38 ft. rise. 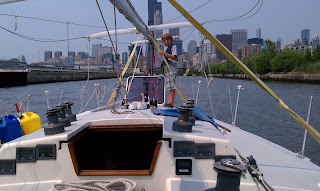 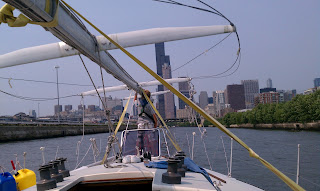 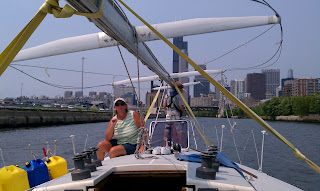 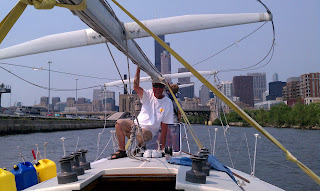 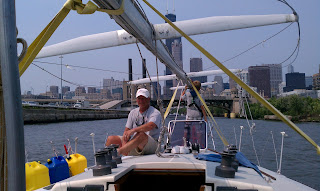 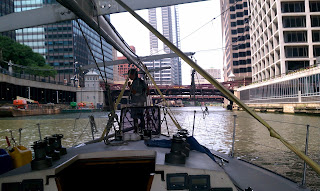 Downtown Chicago. When we passed under the Canal Street bridge we had to remove the windex arm, put everybody on the bow, and weigh down the end of the mast with a bucket of water to clear the bridge. 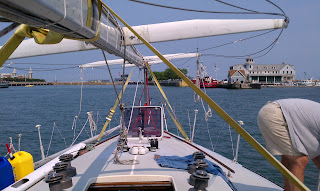 Approaching the last lock between Chicago and Lake Michigan. I jumped the gun and tried to enter the lock early and received a rather public lecture from the lockmaster to wait my place in line. 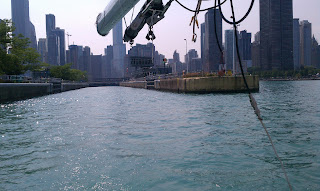 Finally. The last lock behind us and we're on Lake Michigan. Now on to Burham Harbor to put the mast up. 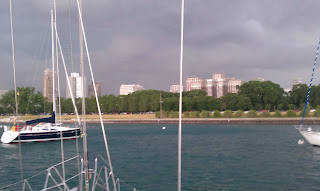 On the mooring with a storm approaching. Nothing like the Lockport storm, but it did have a officially recorded 82 mph wind gust. This storm went on to cause a lot of damage in W. Virginia. 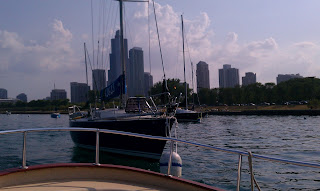 In a tender, water taxi, leaving the boat on it's mooring. 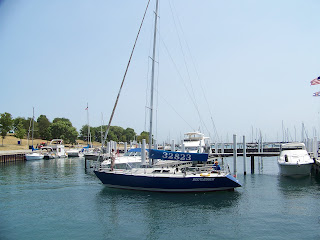 Leaving Jeanne and the kids after their short Fourth of July visit. 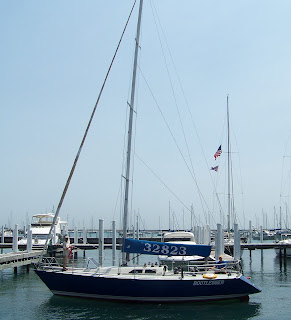 In Chicago Yacht Club.
Posted by dbonzai at 1:52 PM