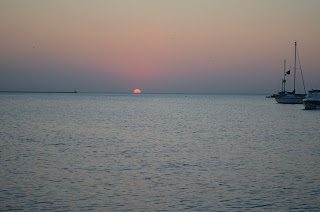 Sunrise from the mooring before we depart for St. Joseph's, MI


The Tri-State Regatta never seems to disappoint and the 2012 running was no different. First of all, we choose not to do the race because of the dropping out of some crew and instead sailed to St. Joseph, MI on Friday for the party on Saturday. It was an easy spinnaker run with us moving at 7-8 kts most of the time. 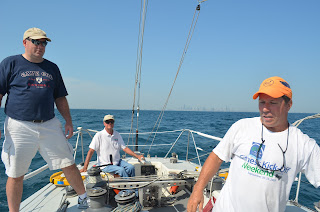 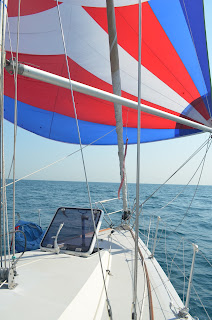 Once we arrived in St. Joe’s I did something that very few have done…I hit a tree, actually just a few branches, when we were pulling up to the wall. Because of the low lake levels there was only 8 ft of water at the wall, only six inches more than Bootlegger requires, so we had our eyes on the wall and the depth sounder. Before I knew it there was a cracking noise in the rigging and bunch of small branches stuck between the starboard D1 and the V1. No damage done to Bootlegger and the tree no longer overhangs the wall.


On shore we immediately met Dawn and Nick, mother and son, who were on their way to do shots, something I’ve never thought of doing with my mom. It turns out that Dawn owns a bar with docks behind it named the River’s Edge, and they offered us free docking. So we did what anyone with a boat named Bootlegger would do and moved the boat to their bar. What they didn’t mention was that the dock was only 12’2” wide, only 2 inches wider than Bootlegger.


The bar was interesting to say the very least, with a few of the patrons speaking in a sloppy Cajun dialect, and racism spoken out loud as if  we were at a Klan rally. We left our mark on the bar by taking down a ceiling tile and signing our names on it. Why? Who knows? 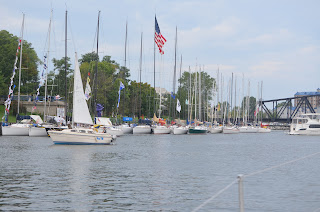 Saturday morning the boats started to show up from the race and tie up along the wall, so we moved back to the wall. This time leaving the branches connected to the trees. I don’t know if it was a sign of the times or what, but there was absolutely no party or celebration in the park, and worse, there was only one Porta Potti for about 600+ sailors. Needless to say it reached the totally gross stages in a hurry.
St. Joseph Yacht Club knows how to throw a party, and even a short downpour from Isaac couldn’t temper the festivities. The band, P.S. Dump Your Boyfriend aka Pfreak Show, was fantastic. If you ever get a chance to hear them, I promise, they won’t disappoint.
While other boats set goals, like winning the race, we set the bar low and decided ours was to get a picture of one of the crew members wearing the football helmet that the male lead singer wore while doing a Beastie Boy song. Goal accomplished! The crew was fantastic and fit in perfectly with the mood of the party and Bootlegger; I owe a lot to them for bringing the party to the party. They’re always welcome on Bootlegger.
Posted by dbonzai at 10:58 AM