The ads below feature Lotus, a Peterson/Wiggers 37 owned and campaigned by Sy Kaback. 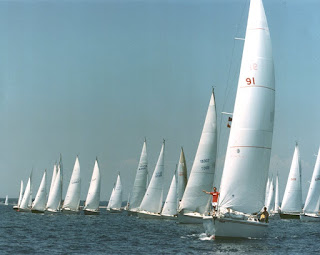 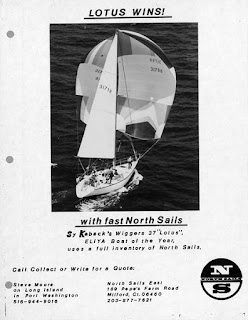 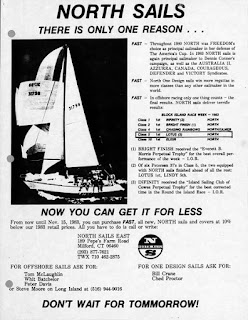 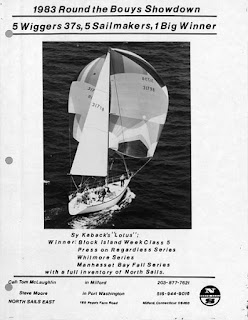 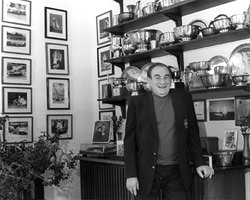 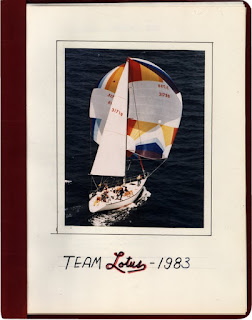 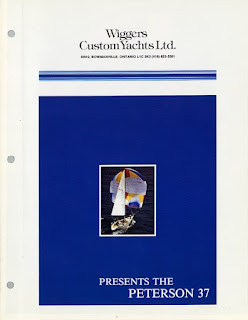 The unparalleled successful racing season culminated in "Lotus" winning two first places on successive days and first overall in I.O.R. Class C in the Manhasset Bay Invitational Fall Series.
This team effort began early in the year with Bill Kelly visiting the Wiggers plant in Canada and deciding on the Petersen 37. A great deal of engineering and planning between Bill Kelly, Tom McLaughlin and Andy Wiggers resulted in the final product.
Despite the late delivery of the mast, McMichaels finished the installation of the instruments, rigging, etc. in time for us to enter the American Spring Regatta. David Silberkleit returned from his ski hiatus to take care of all the details and get the "Lotus" race ready.
In every series that we entered this year we finished first or second in class. Among these wins were:

The highlight of the season was the gratifying first place win in the I.O.R. Class 5 at Block Island. Class 5, with 35 yachts, was undoubtedly the most competitive class at the Storm Trysail Yacht Club's Block Island Race Week.
There were (5) Wiggers Petersen 37's each equipped by a different sailmaker, as well as "Lindy", the prototype Petersen 38. Farr was represented by "Migize" (won 5 of 6 races in the S.O.R.C.) and (2) new Farr 37's "Sugar" and Mandala". Bruce Nelson was aboard the Nelson-Marek 39 foot "Conamore". "Stajon" and the other Nelson-Marek boats were in our class. "Messenger" and the latest German Frers creations were present with outstanding crews.
Lack of wind prevented anyone in our class finishing race #1 and consequently everyone started out with 35 points. Without this handicap, our total for the remaining races would have put us in line for overall fleet winner. (over 300 yachts) En route to block island, we managed to come in first in the I.O.R. class in the Sag Harbor Y.C. -Drug Abuse Race.
During the summer season, "Lotus" won the Eastern Long Island Yachting Association Championship - a 10 race series, and was the ELIYA "Boat of the Year". Overall wins included the Shelter Island Yacht Club Heatherton Trophy, the Eastern Sailing Club Annual Regatta and the East Hampton Yacht Club Bowl Regatta. In Local East Hampton Yacht Club Gardner Bay races, "Lotus" won (2) firsts and (1) second.
Additional kudos go to:
Andy Wiggers - Wiggers Yachts
Tom McLaughlin of North Sails
Hathaway-Reiser and Raymond Rigging
Offshore Outfitters
Sager Restaurant - Sandwiches

and most important
Popeye Chicken without which the whole project would not have been feasible.