Windvane steering: why it makes sense for coastal cruising

Below is an excellent article on windvane steering. The original article can be found in Yachting Monthly ( https://www.yachtingmonthly.com/sailing-skills/windvane-steering-makes-sense-coastal-cruising-66710 ). If you don't subscribe or read Yachting Monthly, you should.

I use a Aries Windvane on Bootlegger and have grown very fond of it. The windier it gets the more powerful the vane gets, and it doesn't use any electricity. Big seas and big wind work an electric autopilot pretty hard causing it to use a lot of electricity at a time that you can't run your engine to recharge the batteries ( Excessive heal can cause the water intake to come out of the water and/or your oil pick-up to stop pumping oil)

Of course, having a alternative source to generate electricity helps. I also carry two electric autopilots ( A Pelagic Autopilot, that I would definitely recommend, and a Raymarine 2000 ) on Bootlegger that I use in the right conditions; motoring, spinnaker, downwind with quartering seas, etc.

Go to "INSTRUCTIONAL VIDEOS," (you'll find it on the right under "PAGES.") for a good video featuring Don McIntrye, the Race Director of the Golden Globe Race, explaining the different types of windvanes.

No electricity needed, built for gale-force conditions and currently experiencing  something of a renaissance amongst  cruisers; windvane self-steering makes sense for coastal cruisers as much as  offshore voyagers. Will Bruton took  an in depth look at the options  and how they work. 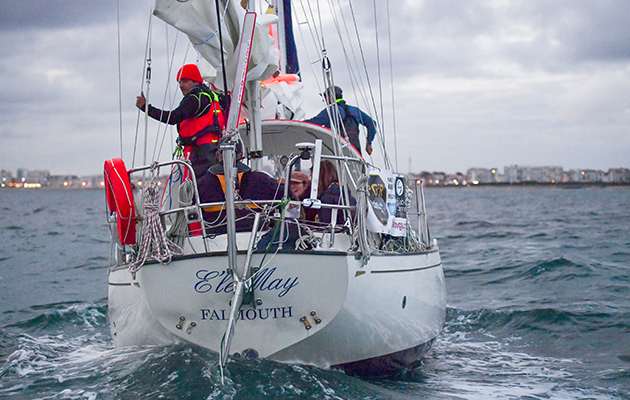 ‘The distance run was 2,700 miles as the crow flies. During those 23 days I had not spent more than three hours at the helm. I just lashed the helm and let her go; whether the wind was abeam or dead aft, it was all the same: she always stayed on her course,’ wrote Joshua Slocum in 1895.
The ability of his long-keeled Spray to hold course without input from the helm was instrumental  in making her the first yacht to circumnavigate single-handed.
Few modern boats bear these inherently balanced characteristics, so some form of autopilot is necessary to allow the skipper to rest.
Even for crewed passages, it can take an enormous strain off the crew without draining the battery. Some insurance companies even count windvane steering as an additional crew member, such is its contribution to life on board. 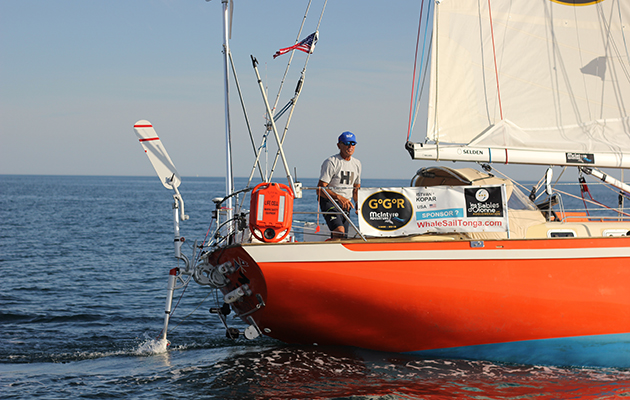 Unlike an electronic autopilot, self-steering needs no power
One solution experiencing something of a renaissance, is windvane self-steering.
Requiring no electricity, mechanical self-steering gear was first designed in an age when autopilots were the preserve of large ships and heavy motor cruisers. The principle is relatively simple and pure physics.
What mechanical self-steering cannot do is hold your yacht on a compass course. However, as anyone that’s experienced a sudden wind shift or squall whilst away from the helm knows, steering to a wind angle is preferable most of the time as you are far less likely to crash gybe, and the sails remain correctly set.
Self-steering gear achieves this by presenting a vane directly into the wind. When the wind acts on either side of this vane, it tips, transferring this action through the mechanism below to either a rudder or a servo pendulum which acts on the main rudder, altering the boat’s course.

A derivative of the servo-trim tab principle invented by Blondie Hasler, servo-pendulum self steering gear uses the speed of the yacht going through the water to push against the servo-paddle, creating a substantial force, which is then transferred to the yacht’s own tiller or wheel by control lines.
The wind itself does not provide the power for the steering; rather it adjusts the angle of the paddle, relying on the hydro-mechanical energy of the boat going through the water to do the work of steering the boat.
Popular before the advent of the small craft electronic autopilot, it’s particularly well suited to yachts under 40ft in length, and can be swung out of the water when not in use.
There are now several derivatives, including some available as a self-build kit. Amongst the Golden Globe Race entrants, models included Aries, Monitor, Windpilot and Beaufort systems.
One disadvantage of the servo-pendulum gear is that it uses the yacht’s rudder, meaning it does not double up as an emergency rudder should the yacht’s steering be disabled, although some servo-pendulums can be adapted.

Wind vane steering linked to a secondary rudder is the most inherently simple of the mechanical self-steering systems, but relies on a much more powerful transmission of force between a large-surface-area wind vane and the system’s own independent rudder. 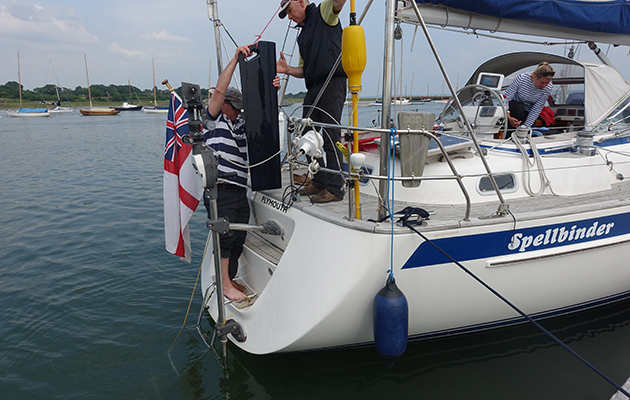 Direct drive systems feature a large fully independent auxiliary rudder
This has the advantage of ensuring  a back up steering method is already on board but also requires a heavy-duty installation to bear the load and strain that will be exerted.

One of the most popular models is the Hydrovane, which is now available in several different sizes and shapes depending on  the boat it is being installed on.

The size  and shape of the fabric-covered windvane is directly proportional to the size of yacht, and has been installed successfully on yachts in excess of 50ft in length, including multihulls.
When the boat veers off course, the  wind hits the vane on one side or the other, deflecting it away from the vertical.

This then acts on a gear that converts  this sideways movement into rotation to directly steer a relatively large rudder suspended from the boat’s transom via  the installation framework.

‘Before doing anything, you have to get the boat sailing well. It demands you take the time to get your boat properly balanced, correctly reefed and with no weather helms; so it actually makes you a better sailor!’ explains Nick Nottingham, who recently fitted a Hydrovane to his Hallberg-Rassy 42, Spellbinder. Nick is about to use the system on an Atlantic circuit. 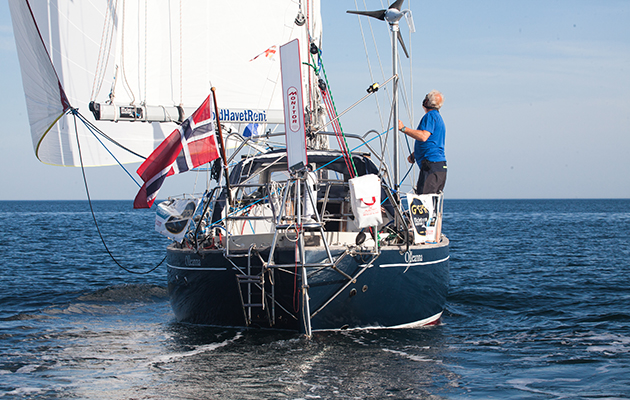 Self-steering relies on a well balanced boat. As the wind shifts, the mechanism corrects
Self-steering gear works by adjusting the yacht’s course in relation to the apparent wind. The first step to making this work as efficiently as possible is to balance the boat and reduce the amount of input required.

Sailing conventionally, the yacht should be easy on the helm and not overpowered.


Setting the system for the conditions

Whether servo-pendulum or direct drive, most self-steering systems have one or more methods of adjustment for the conditions. In light airs, the wind vane will be exposed as much as possible to the wind, to exert the maximum force on the system, whereas in heavier weather, the vane’s height can be lowered, reducing the force acting on the system.


Some systems, like the Hydrovane, Monitor and Beaufort have different sized vanes that can be swapped, while the Windpilot and Aries allow the vane to be raked aft, presenting a shorter level. 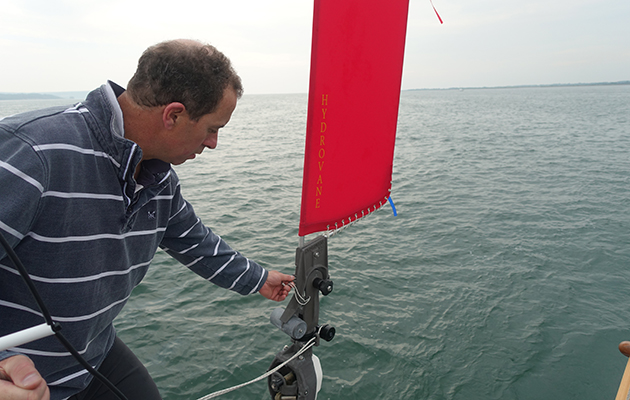 With the wind vane attached, you are ready to remove the locking pin and engage the steering mechanism

On some set ups, the power exerted on the steering system can also be adjusted at the point where the wind vane meets its pivot, just like changing sensitivity on an electronic autopilot. By controlling the rotation of the rudder or paddle created by the windvane, you control how aggressively the system corrects the boat’s course.

Changing the gearing at the point where the wind input creates the steering output achieve an increase or decrease of ratio.

To engage the system, set the yacht on course and adjust the wind vane so that the wind is flowing over it with the least resistance, like a blade.

If you a using a system with its own rudder, centralise and lock the yacht’s main rudder, simultaneously engaging the self-steering mechanism. 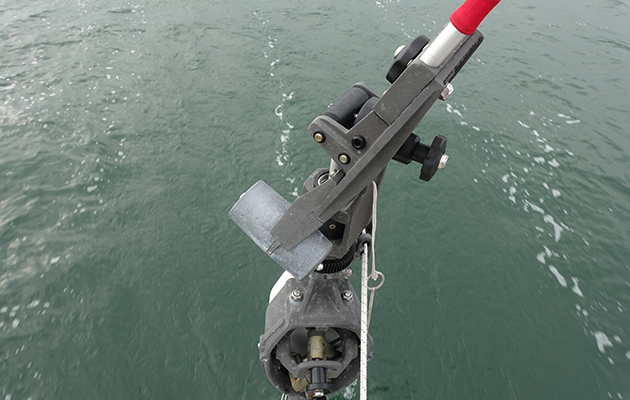 Once engaged, monitor how the system adjusts and double check your sails are trimmed correctly.
As the vane moves it will adjust the steering accordingly.

In heavy weather, reduce the system’s power to ensure the least amount of strain.
Self-steering systems work efficiently in strong winds but most will steer comfortably in light airs as well.

When the wind vane is vertical, you are on course. When the vane is deflected, the system is adjusting course.

Changing the direction you want to go in is simply a matter of altering the self-steering system’s vane angle relative to the wind. 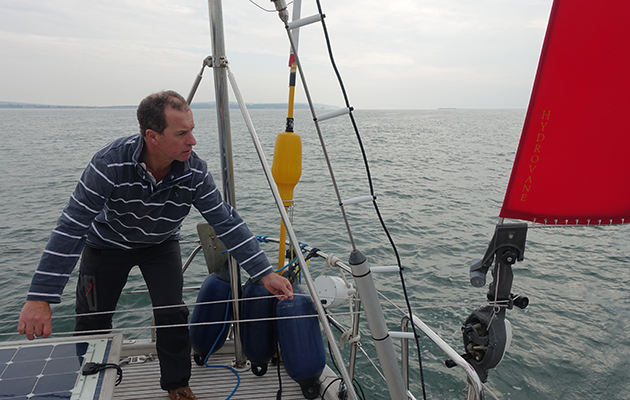 On most systems this is achieved by a steering line that can be run into the safety of the cockpit, meaning you do not necessarily need to adjust the vane itself directly.

Make small adjustments until the yacht comes onto the desired course, trimming the sails appropriately.

Whilst self-steering systems offer a much more resilient option than an electronic autopilot for heavy weather, when there is no sailing wind, they cease to be useful. 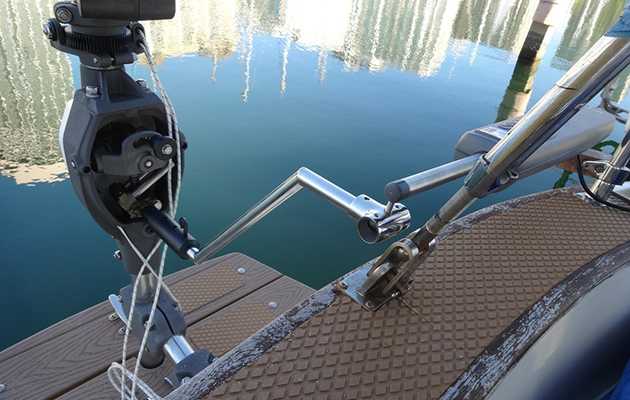 Here an electronic tillerpilot has been plugged directly into the Hydrovane auxiliary rudder
For this reason, most cruisers also have a conventional electronic autopilot on board to steer under engine.

In the case of systems incorporating a rudder, many also make it possible to easily engage a tiller pilot onto the system’s auxiliary rudder for use under engine.

Self-steering on the Golden Globe Race

If there’s one place that mechanical  self-steering fandom bordered on the evangelical this year, it was at the start of  the Golden Globe Race. 50 years previously, Robin Knox-Johnston’s world first single-handed circumnavigation was steered by his own self-steering gear system until it failed  near Australia. 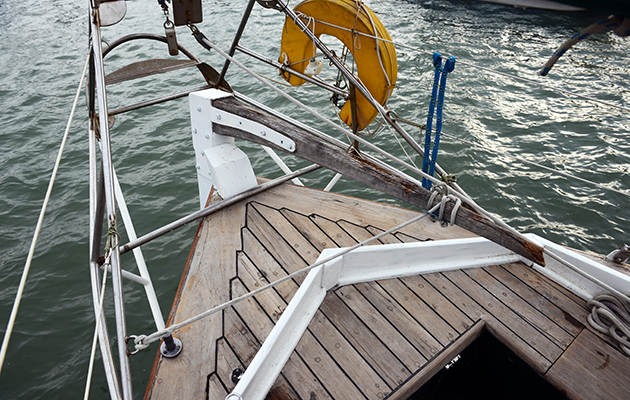 Competitors in the race are using a variety of systems including Hydrovane, Aries, Monitor, Windpilot and Beaufort.

Due to the nature of the boats competing being long keeled, they are ideally suited to mechanical self-steering, naturally holding course better than a modern hull. However, should systems fail and prove unrepairable, it will be hard  for them to remain competitive in the race.

https://www.yachtingmonthly.com/sailing-skills/windvane-steering-makes-sense-coastal-cruising-66710
Posted by dbonzai at 1:41 PM