Below is an article from the Detroit Free Press about the change of rating system in the Bayview (Port Huron) - Mackinac Race. As much as I would love to see the change on the Chicago side, I think that it is doubtful. 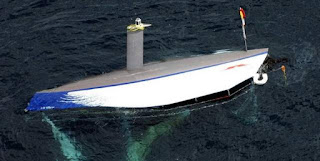 WingNuts, which capsized during the Chicago-to-Mackinac race in July, was determined to be too unstable for a race that long. / John L. Russell/Associated Press

After several years of newer handicap rating systems, including last year that saw a slew of normally long-course boats defect to the shore course to sail under the PHRF system, the Bells Beer Bayview Mackinac Race is returning to the PHRF rating system for all classes.

Also this year, host Bayview Yacht Club is making a couple of minor safety changes in the wake of WingNuts capsizing in last year's Chicago race, killing two Michigan sailors. This year, all sailors will be required to carry a knife that can be opened with one hand, and have a quick release tether with the quick release end attached to the sailor, not the boat.

Using PHRF, which stands for Performance Handicap Racing Fleet, is a nod to popular demand, said race chairman Greg Thomas. The problem with newer rating systems is that initially they work well, but eventually boat designers and builders start to figure out the type of boat that will receive a more favorable rating and build to the system, Thomas said. The newest rating systems were supposed to change as that happened. But the reality was they didn't change.

"The high-end grand prix sailors, they've got all the money in the world, they like that kind of rating system," Thomas said. "But our bread and butter in this race is the guy who's been doing it for 42 years with his grandfather and grandson. We put a lot of thought into it, and in the final analysis, we needed to play to our constituency."

The only wrinkle is there is no stability index under PHRF. U.S. Sailing, after examining the WingNuts tragedy, put the onus on the clubs sponsoring regattas to consider the stability index of each boat in deciding whether to permit them to enter.

U.S. Sailing, the sport's governing body, determined the ultralight monohull WingNuts was too unstable to enter a race as long as the Chicago to Mackinac Race, with unpredictable Lake Michigan weather and no safety boats along the course. WingNuts, however, passed the stability rating in ORR, the handicap rating system used by the Chicago Yacht Club.

Bayview's solution is to consider each type of boat individually. The only exception will be multihulls, in which case Bayview will bow to the class' own determination.

"We have enough gray hair and experience around that club to take a look at the boat and determine if (its stability index) needs to be looked at," Thomas said. In those instances, Bayview will convene a panel of experts to make the final decision.