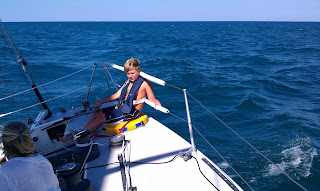 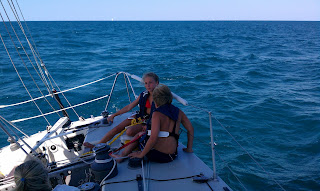 Kathryn driving
We spent 4 Aug – 11 Aug on the boat in Chicago. Our original plans were to sail Racine, WI and St. Joseph, MI or where ever the wind took us, but the weather had other plans. The beginning of the week had light winds and the end of the week had plenty of wind with gale warnings and waves that came right over the break wall. The weather was so bad for Thursday and Friday that we received permission from the harbor to relocate Bootlegger to a less vulnerable mooring, and the Verve Cup cancelled all racing on Friday. Below is a posting from the Verve Cup race committee.


CHICAGO, IL (August 11, 2012). Today on the water the circles were each able to get in three races after Friday’s racing was postponed due to weather in the Chicago area, including wind gusts approaching 40 knots (46 MPH) and waves nearing 14 feet. Verve Cup Regatta Chair Martin Sandoval said that after no racing on Friday, competitors were eager to get out on the water today. “You can never make up the missed races, but we got three races in each circle today and it should be good sailing tomorrow with more moderate weather.” Chris Bedford of Sailing Weather Services said racers can expect “a bit of a mixed bag” when Sunday’s racing begins. “During morning racing there will be a lingering offshore breeze around 10 knots,” Bedford said. “That wind is expected to die during the morning with variable conditions mid-morning through early afternoon. There will be a midday southeast lake breeze of 5 to 10 knots and the waves should be down, so it should be pretty nice out there tomorrow.”


Due to the foul weather we were limited to day sailing and a quick trip to Hammond, Indiana and back, but never did get in our originally planned trip to Racine, WI and St. Joseph, MI. 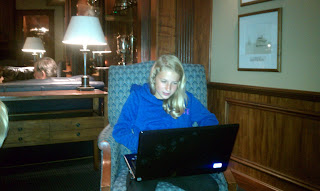 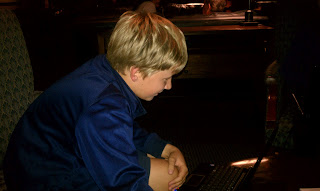 More computer time in the CYC 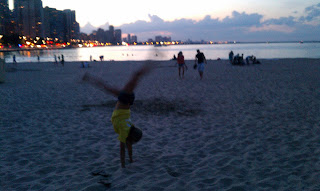 Kathryn doing handstands on a beach north of Chicago
Posted by dbonzai at 4:28 PM