What happened in the Mac

I’ve been real slow at get this out, but here it goes. The 104th Chicago to Mackinac Race is over and here’s how it played out for us: the things we did right and the things that cost us. First of all, I’ve never been in a Mac Race like this one: it was fast, we put the chute up at the start and took it down at the finish, and any little mistake was capitalized on by the competition and very hard to make up. First place in our division, Chicago-Mackinac Trophy, finished in 37:28:47, while we finished 84th place in 40:53:40, that’s close especially for a race that’s 333 miles. Within our section, Section 07, first place finished in 39:05:10, we finished 15th in section 1:48:30 later.


The start went… well….not as planned. My plan was to start in clear air away from the majority of the fleet, in this case the committee boat end, but the wind died right at the start and we ended up trapped at the pin end behind most of our section. Why would I do this? Our sail handling wasn’t as strong as needed and I was concerned that putting us in the heat of things during a downwind start with a chute and having to do some fast last minute gybes could put us in a position to do a lot of damage. Starting a 333 race in last place a minute or less behind the rest of the fleet didn’t cost us very much. Once we got our .5oz flying we rapidly put time on our competitors. David Stevenson did a great job keeping us out of trouble.


After the start the wind allowed us to stay close to the rhumbline until Saturday, July 21 @ 19:56 when we gybed to port tack. The idea was to put us between the new wind and the competition. The eventual winners of our section: Smokum Too (1st), Fast Tango (2nd), and Velero VII (3rd) all stayed on the original tack sailing at 37-44 degrees to our 344. Once we hit the rhumbline we sailed up the line until Little Sable Point.


At Little Sable Point our competition, to the east of us, sailed in 11 knots to our 9.7, but we sailed about 1kt faster due to the angle. Between Little Sable Point and Big Sable Point we passed Velero VII. Velero VII and Fast Tango went east to shore while Bootlegger and Smokum Too went west of the rhumbline.


Sunday, 22 July at 12:27 we gybed to 300 degrees to get out of hole. We were trapped in a convergence zone between a sea breeze to the east and the new wind to the west. Smokum Too was to our north and west. The gybe to the west cost us. The boats inside of us kept moving in the right direction and Smokum Too set themselves up to sail a hotter angle into the Manitou’s.


Sunday, 22 July at 18:31 everyone, but Bootlegger gybes towards Point Betsie. We stayed on the rhumbline. Smokum Too moves into first place.


It became evident that the first boats into the Manitou’s would get the most benefit from the wind and would put miles on everyone else. The rich would get richer. We lost some time getting into the Manitou’s after our competition and Velero VII regains their lead over us.


Monday, 23 July at 00:00 we gybed just outside of the Manitou’s and separate from the fleet. Our competition is sailing at 39-43 degrees to our 24 or less (sometimes around 300). Our speed is equal to Fast Tango and Velero VII, but .20kts slower than Smokum Too. At 04:28 on Monday we gybed away from Beaver Island. The competition stayed pretty much on the rhumbline. 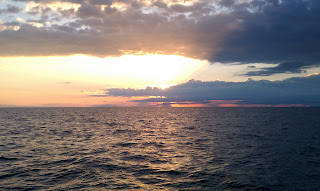 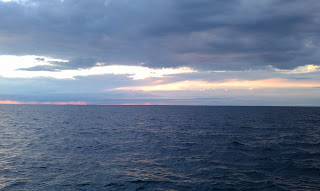 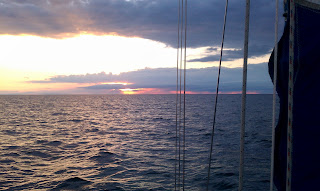 Once we reached Gray’s Reef it became evident that going to the west was very costly. Between the exit of the Manitou’s and Gray’s Reef we lost 8.8 miles to Smokum Too, 6.4 miles to Velero VII, and 6 miles to Fast Tango. 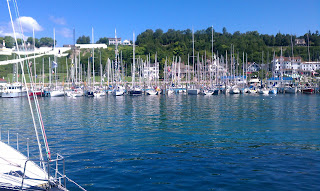 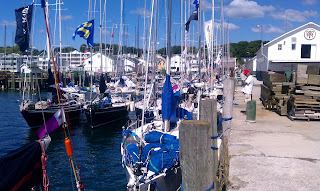 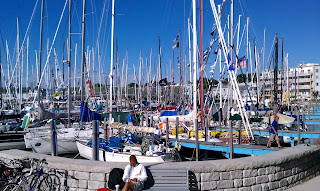 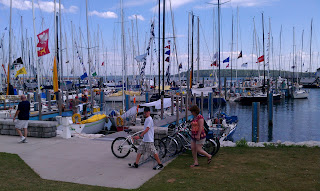 Some pictures of the 335 finishers docked at the island. Bootlegger is in the middle of the bottom picture (blue main cover with white 32823 on it)


·         Our weather prediction was closer to reality than the committee’s


What cost us (without repeating the above):


·         Joe and I didn’t get enough sleep and became ineffective on Sunday night. The night that we should have put the most time on everyone else.


·         Not practicing enough before the race. This one is huge and hurt us more than everything else.


·         Sailing to the curl. Works well when shorthanded, but with a crew we should have driven to a course and the crew adjust to the wind. You can’t drive to the curl and the course unless the wind doesn’t vary at all.


Much like the race the trip home was fairly uneventful. We did have a short blow of around 27-28kt true from the south, the direction we were heading, above the Manitou’s, but that settled down and allowed us to make good time. We made one stop in Frankfort for fuel and a pump-out and then motor sailed back to Chicago. We arrived in Chicago around 18:30 on Friday. Top speed on the GPS was 12.2kts. 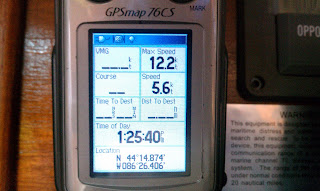