The plan was to keep the boat out of the water and in St Louis so that I could complete some of the projects that I’ve put off, once and for all. I wanted to repaint the topsides and deck, renew the anti-skid, install a removable V-berth, install a SSB, repaint the mast, etc.

If there’s one thing that a boat owner should learn, is that your plans have to stay flexible. In my case, that means working around an unanticipated flood.  More accurately, the second flood of the year.

Originally, the forecast was for a flood peak of 28.8 ft, I start to float at 35 ft, nothing to worry about. Then the forecast changed and in less than 24 hrs it was revised up to 34.1 ft. Of course, it is likely to go even higher if we, or those north and west of St Louis, get more rain. So how do you prepare for a major flood? Launch the boat, if possible, and putting it in a dock would seem like the obvious thing to do. After all, the boat doesn’t care how deep the water is as long as it’s deep enough to float. I would love to have had that option, but the water came up so fast that the lift well, and the road to it, want under water before we could launch.

Plan B. Strap the boat to the cradle so that if the boat does float it stays in the cradle and doesn’t fall on its side when the water recedes; tie the boat to trees and put an anchor out so that the boat doesn’t take a wild ride thru the woods or go to Memphis; put the mast on the deck to keep it out the water; make sure the cockpit drains are clear; close all thru-hulls, but not cockpit drains; charge the batteries; bilge is dry; etc. 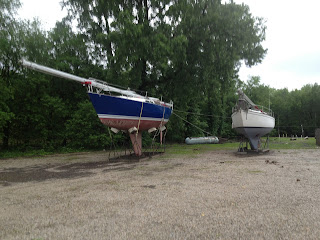 The water is already at the tree line. Tied to the Alberg 35 which is going to be tied to a building and an anchor put out. 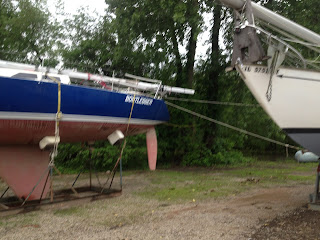 Anchor line off of the stern 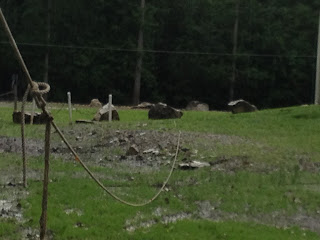 175 ft of anchor line and chain to a boulder behind Bootlegger. I tried to use my Suburban to set the anchor, but the ground was too hard and rocky, so I put the anchor and chain around the boulder. 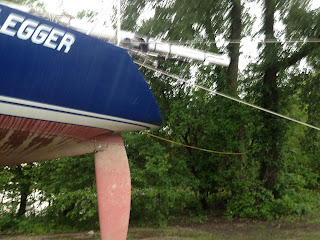 The yellow line ties to the tree and the white one to the anchor/boulder. 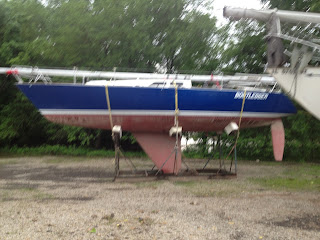 Three 12,000 lb. breaking strength straps tie Bootlegger and the cradle together. The cradle ought to kill my light air performance. Maybe I should put in for a rating adjustment. 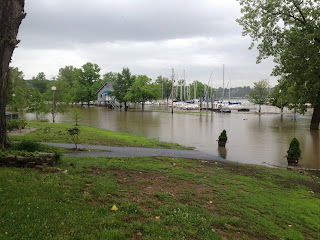 Water on the rise, 10 more feet 'till peak. Under normal pool you would be able to see the road that is now covered with water. Photo taken at 12:30 PM on Friday, May 31. 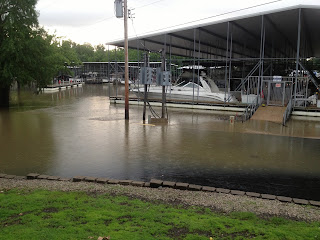